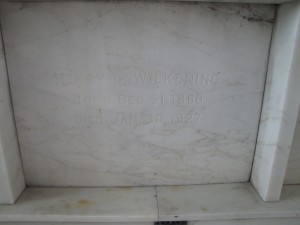 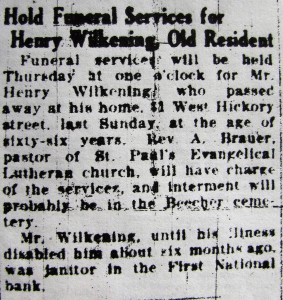 Funeral services will be held Thursday at one o’clock for Mr. Henry Wilkening, who passed away at his home, 81 West Hickory Street, last Sunday, at the age of sixty-six years. Rev. A. Brauer, pastor of St. Paul’s Evangelical Lutheran Church, will have charge of the services, and interment will probably be in the Beecher cemetery.

Mr. Wilkening, until his illness disabled him about six months ago, was janitor in the First National bank.

Henry C. Wilkening, a one time resident of this place,  and who had many relatives and friends here, passed away, Sunday evening, at his home, 81 West Hickory Street, Chicago Heights, aged 66 years. Funeral services were held at Chicago Heights at the St. Paul’s Evang. Lutheran Church, with Rev. A Brauer officiating. The remains were brought to Beecher and laid at rest in the Beecher Mausoleum. 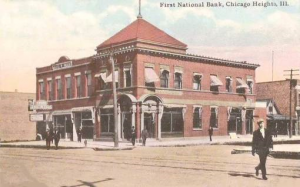 Until his illness disabled him about six months ago, Mr. Wilkening was janitor in the First National Bank at Chicago Heights.

(Editor’s note: Henry had been manager and foreman of a tile yard or brick yard for many years, after which, in his golden years, he kept himself busy as the Janitor at the First National Bank at Chicago Heights, IL)

One thought on “HENRY C. WILKENING”