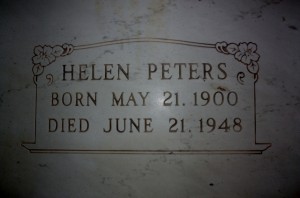 This afternoon at 1:30 o’clock services will be held in the Hack Funeral Parlor in Beecher and at 2:15 o’clock in the Immanuel Lutheran Church in Steger, with the Rev. William Mehringer officiating. Interment will be in the mausoleum at Beecher.

Besides her husband she is survived by two daughters, Mrs. Verna Eckhoff and Mrs. Eleanore Palanca, and three sons, Rubin, Norman and William Jr., two brothers, Arthur Wehling of Sollitt and Harry Wehling of Chicago Heights, and a twin sister Mrs. Amelia Rust of South Chicago Heights. There are four grandchildren. 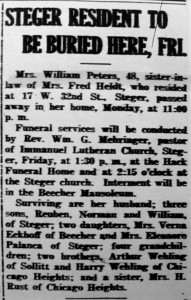 Funeral services will be conducted by Rev. Wm. G. Mehringer, pastor of Immanuel Lutheran Church, Steger, Friday, at 1:30 p.m., at the Hack Funeral Home and at 2:15 o’clock at the Steger church. Interment will be in the Beecher Mausoleum.

Helen’s family members also resting in the mausoleum are: