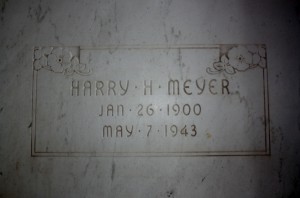 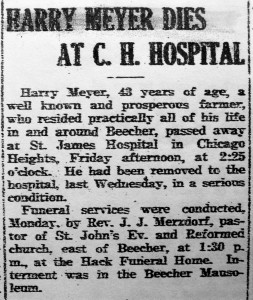 Harry Meyer, 43 years of age, a well known and prosperous farmer, who resided practically all of his life in and around Beecher, passed away at St. James Hospital in Chicago Heights, Friday afternoon, at 2:25 o’clock. He had been removed to the hospital, last Wednesday, in a serious condition.

Funeral services were conducted, Monday, by Rev. J.J. Merrdorf, Pastor of St. John’s Ev. and Reformed Church, east of Beecher, at 1:30 p.m., at the Hack Funeral Home. Interment was in the Beecher Mausoleum.

Harry Henry Meyer, son of the late Henry Meyer and his wife Melsina nee Fiene, was born at Beecher, January 26, 1900. After a month later, on February 25th, he was brought by the parents and sponsors for Holy Baptism, the Rev. G. Koch performing the service. When he was three years of age, his parents moved from here to a farm near Harvey where he attended the grade school, graduating in 1913. A year later, in 1914, he accompanied his parents back to Beecher on the farm directly east where he assisted and worked on the farm until the parents moved to Beecher and retired in 1930. Only a short time after, his mother died and the father followed a short time later. His sister also preceded him in death. During the year 1921, the deceased received special religious instruction in the way of life and salvation thru faith in our Lord. At the end of the instruction period he was confirmed in his faith, December 11, 1921, by the Rev. Seidenberg. His confirmation verse was: Phil 3:12-14: “Not as though I had already attained, either were already perfect: but I follow after, if that I may apprehend that for which also I am apprehended of Christ Jesus. Brethren, I count not myself to have apprehended: but this one thing I do, forgetting those things which are behind and reaching fourth unto those things which are before, I press toward the mark for the prize of the high calling of God in Christ Jesus.”

In 1941, he moved from the farm east of Beecher to one a little farther south, which he worked as supervised until the day of his death. He had been failing in health for some time and on Wednesday, May 5th, he was removed to St. James Hospital at Chicago Heights. It was found that he was seriously ill and he was put under the oxygen tent. The near relatives were informed of his sinking condition. On Friday afternoon, his pastor was informed of his illness, but before he could get to his bedside he passed away at 2:25 p.m., Friday, May 7, 1943, at the age of 43 years, 3 months and 11 days. He leaves to mourn his departure, two brothers, Carl Engelking, Beecher; and Fred Engelking, Manteno; one sister, Mrs. Sophie Farrenkopf, Harvey; (his sister Augusta Kierking, passed away in 1931); two sister-in-laws, Mrs. Carl Engelinkg and Mrs. Fred Engelking, one brother-in-law, Henry Farrenkopf; also nephews and nieces and cousins and other relatives.