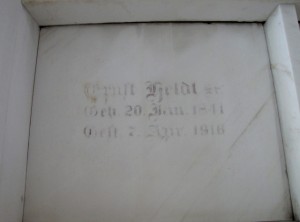 PORTRAIT AND BIOGRAPHICAL ALBUM OF WILL COUNTY 1890

E. Heldt. Among the respected enterprising farmers of Washington Township, the name of our subject deserves mention as that of one who in a comparatively short time has accumulated a fine property and secured a good position among the substantial men of the county. He owns and occupies two hundred acres of fertile land on section 27, and thereon has erected a full line of excellent farm buildings, including every convenient and necessary structure. Industrious and zealous in whatever he undertakes, upright in all relations of life, and manifesting an intelligent interest in the advancement of the section in which he has made his home, Mr. Heldt is highly respected by his fellow citizens.

The parents of our subject were Christoph and Margaretha (nee Viter) Heldt, natives of Mecklenburg, Germany, in which Province their ten children were also born. Two sons and six daughters lived to accompany their parents to America, to whose shores they set sail from Hamburg in May 1856. 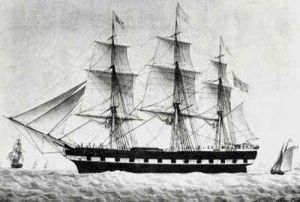 Their passage was secured on the sailing-vessel “Oregon,” which made a landing in New York City after a voyage of seven weeks and four days. The family soon afterward came to Chicago, and then located in Du Page County. They were very poor and at first had a hard time to get along, but they were industrious and determined, and soon their labors were rewarded by their ability to rent land on which they made a good living. The parents were members of the Lutheran Church, and not only led upright lives, but endeavored to instill into the hearts of their children the principles of right living. The mother died in Du Page County, in September, 1864 when upwards of three-score and ten years of age. The bereaved husband came to Will County some months later, and died at the home of his son, William, in Washington Township, in 1868. He was seventy-five years old.

The natal day of our subject was January 20, 1842. In his native land he obtained the education which Germany ensures to all her sons, and labored with other members of the family as his growing strength would permit. After the removal to America, he settled with the others in Du Page County, Ill., remaining there until 1868. In the meantime he had passed his majority and had taken unto himself a companion in life, with whom he established his home in Will County on eighty acres, which forms a part of his present homestead. To this he added according to his ability, until the landed estate reached two hundred acres and all was placed in a fine condition. For nine years Mr. Heldt served as Road Commissioner, giving general satisfaction to the traveling public, and particularly to the agriculturists. His political adherence is given to the Republican party. He and the members of his family belong to the Lutheran Church.

The lady with whom Mr. Heldt was united in marriage in Du page County, bore the maiden of Lucetta Stedt (correction: Lisette Stadt). She was born in Mecklenburg, Germany, January 8, 1843, and was fourteen years old when her parents came to this country. She remained with them in York Center Township, Du Page Country, until her marriage. She is a women of intelligence and genuine worth, who looks well to the ways of her household and endeavors to faithfully discharge every duty. (A full history of the family of which she is a member will be found in the biography of William Stedt). Mr. and Mrs. Heldt have had eleven children and mourn the loss of Rosetta, Sophia, and an infant unnamed. The survivors are: William, a farmer in Washington Township, who married Emma Blevening (correction: Blievernicht); Amelia, Wife of Henry C. Hausen (correction: Seehausen) , whose home is a farm in Crete Township; Charles, Emma, Fred, Ernst, Louis and Robert, who are yet at home.

Ernest Heldt, Sr. whose death was briefly mentioned in last week’s Beecher Herald,  was born January 20, 1841, at Kupenhagen, Mecklenburg, Germany. In 1852 the family came to America, landing at New York, and working their way through to Lombard, near Elmhurst. October 26, 1862, he was married to Miss Lisette Stadt at Franken Church, Addison.

Mr. and Mrs. Heldt lived in York Crete Township, DuPage County, up to 1868, when they moved to Yellowhead Township on a farm they purchased. In the fall they sold that farm and purchased the farm which has since been known as the Heldt homestead, three and one half miles southeast of Beecher.

Eleven children were born to Mr. and Mrs. Heldt, three having passed away at an early age. The surviving children are: William, Charles E., Fred E., Ernest, Jr., Louise, Robert, all of Beecher; Mrs. Seehausen of Crete and Mrs. Henry Fisk of near Beecher.

Mr. and Mrs. Heldt moved to Beecher in 1906, taking up their home in a new residence on Indiana and Maxwell Streets. On October 27, 1911, the couple celebrated their golden wedding.

About eight weeks ago he was taken ill, growing weaker and weaker until on April 7, 1916, when he succumbed at 10:45 p.m., his family being at his bedside when he breathed his last.

The mourners are his devoted wife and children, thirty-five grand children and four great grandchildren and a very large relationship. At the time of his death he was 75 years, two months and 17 days of age.

The funeral was held on Wednesday, April 12 at 1 o’clock p.m. at the house and at 1:30 o’clock at the church. Rev. G. Horst officiated at the services and Rev. H Siegfried, who had known the deceased many years and who had been his pastor when he lived on the homestead, also paid a tribute in a few well chosen words. The funeral was one of the largest ever held in Beecher and the floral offerings were numerous. Burial was at the Beecher Mausoleum.

Mr. Heldt was an honest, conscientious citizen, a beloved husband and father, an ideal neighbor, and a man of pleasant disposition. He was esteemed by all who knew him, and in public life he had held the office of highway commissioner for Washington Township for 12 years. To know him was to like him, and although he had reached a good age he will be missed in the home and community. His many friends extend heartfelt sympathy to the bereaved relatives.