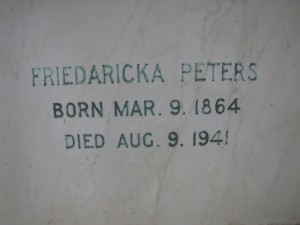 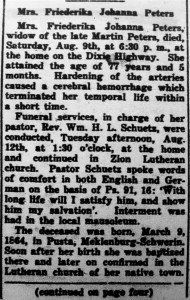 Mrs. Friedarika Johanna Peters, widow of the late Martin Peters, died, Saturday, August 9th, at 6:30 p.m., at the home on the Dixie Highway. She attained the age of 77 years and 5 months. Hardening of the arteries caused a cerebral hemorrhage which terminated her temporal life within a short time.

Funeral services, in charge of her pastor, Rev. William H.L. Schuetz, were conducted, Tuesday afternoon, August 12th, at 1:30 o’clock, at the home and continued in Zion Lutheran Church. Pastor Schuetz spoke words of comfort in both English and German on the basis of Ps. 91, 16: “With long life will I satisfy him, and show him my salvation.” Interment was had in the local mausoleum.

The deceased was born, March 9, 1854, in Pusta, Mecklenburg-Schwerin, Germany. Soon after birth she was baptized there and later on confirmed in the Lutheran church of her native town. Her parents were Fred Barmann and wife, Friederika, nee Schlorf. She had one brother and two sisters, all of whom preceded her in death.

On October 2, 1881, she was married to Martin Peters in Berenshagen, Mecklenburg-Schwerin. Her husband died, January 6, 1929. They were the parents of two sons and four daughters, all of whom survive.

In 1884 the young couple, together with their oldest child, came to America and settled in Chicago for the first seven years. Then they moved out here to Beecher where they continued to reside ever since.

Mrs. Peters enjoyed good health throughout her life until about four years ago when old age began to tell on her. During the last weeks of her life she failed very rapidly. Hardening of the arteries finally caused a cerebral hemorrhage, causing her to pass away rather suddenly but quietly and peacefully.

The near relatives who live to mourn her departure are the following: Mrs. Ida Heldt of Beecher, Mrs. Frieda Piel of Blue Island, Rudolph Peters of Crete, Mrs. Emma Klemme of Petersburg, Mrs. Helena Engelking of Beecher and William Peters of Steger. Also four sons-in-law, 16 grandchildren, 3 great grandchildren and one aunt, Mrs. William Schroeder of Chicago.

Friedaricka’s family members also resting in the mausoleum are: