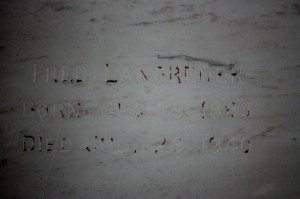 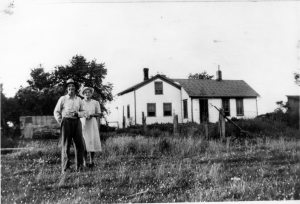 The departed, Frederick Henry Langreder, son of Henry and Louise (nee Ristenpart), both deceased, was born, Dec. 19, 1863, on a farm south-east of Beecher. Soon after birth, he was baptized, and later, following a course of thorough religious instruction, he was confirmed by the Rev. E. Keuchen in St. John’s Evangelical and Reformed Church. On Oct. 9, 1889, he was united in marriage with Alvina Jessen at St. Paul’s Church, Rev. A.H. Brauer officiating. This union was blessed with two children, Walter, of Aurora, and Clara, who passed away at the age of eight years.

On June 28, 1895, a great sorrow overshadowed his life and happy home when the loving wife and mother, after a brief illness, was called to her heavenly rest. The sun, however, broke through the clouds again when his deceased wife’s sister, Miss Marie Jessen, was urged by love and trust to become his wife and the mother of his children, the marriage being preformed in the home, June 2, 1897, by Rev. G. Koch. This happy union was blessed with three children, Charles, who passed away at the age of 28 years, March 12, 1928, Alice Marie, now Mrs. Frank Leder, and Mildred, who passed away suddenly, Oct. 2, 1932. In 1904, while living in Roseland, he became a member of Bethel Evangelical and Reformed Church, where he and his family worshiped regularly until they returned to Beecher.

In the early 1890’s, the departed conducted a dairy on 112th Street, Roseland. Following this, he was employed for ten years by the Plano Mfg. Co., at West Pullman as an expert binder builder. Severing his connection with this company, he found employment with the Pullman Palace Car Co., where he became an outstanding truck builder for the 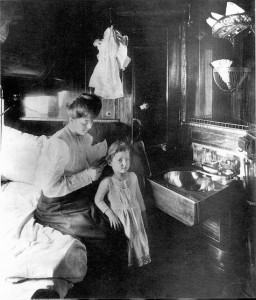 Pullman sleepers. His health beginning to fail, he followed his doctor’s advice and retired from his usual labors. Loving the country, the fresh air and sunshine, he sold his beautiful home in Roseland and, on March 6, 1918, moved with his family to a small farm that he had acquired near the place where he was born. More or less ill for many years, he gradually developed a severe case of sclerosis of the arteries, needing much care and attention, which he received at the hands of his family, especially his devoted wife. Fully realizing that his earthly days were numbered, he finally slipped into a coma from which he never rallied, coming to his peaceful death, Monday, July 29, at 1:30 p.m., at the age of 76 years, 5 months and 10 days. He leaves to mourn his departure, his wife, two children, already mentioned, four grandchildren, two sisters, three brothers, four half-sisters, and a host of other relatives and friends.

Funeral services were conducted on Thursday, Aug. 1, 1940, beginning at 2 o’clock at the Hack Funeral Home, where Rev. G. Horst of St. Luke’s spoke in fitting words to a large gathering of relatives and friends, Two appropriate solos were rendered by Miss Dora Baldauf of Roseland, a friend of the family, accompanied on the piano by Mrs. Frank Hunte. Interment was in the Beecher Mausoleum.

The departed, always a true loving husband and father, and loyal in the things taught him, and in the service of his Master until the above mentioned illness more and more firmly embedded itself, so lived that his bereaved loved ones may well hope and trust that his frequently expressed wish and desire to be with those gone before has been happily realized.

Frederick’s family members also resting in the mausoleum are: