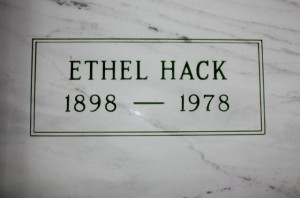 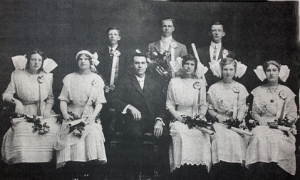 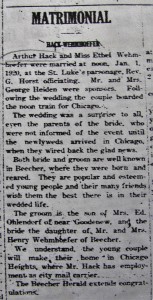 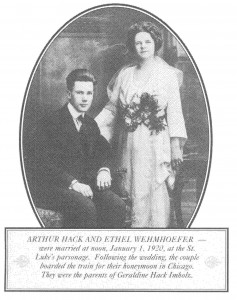 esteemed young people and their many friends wish them the best there is in their wedded life.
The groom is the son of Mrs. Ed. Ohlendorf of near Goodenow, and the bride the daughter of Mr. and Mrs. Henry Wehmhoefer of Beecher.
We understand the young couple will make their home in Chicago Heights, where Mr. Hack has employment as city mail carrier.
The Beecher Herald extends congratulations. 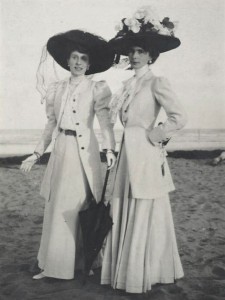 Mrs. Arthur Hack introduced her line of millinery. Her 1925 fall selection was “exceptionally modish, stylish, and with pleasing combinations, sure to suit the individual tastes of the Beecher Ladies.” 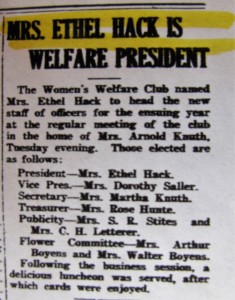 The Women’s Welfare Club named Mrs. Ethel Hack to head the new staff of officers for the ensuing year at the regular meeting of the club in the home of Mrs. Arnold Knuth, Tuesday evening. Those elected are as follows:

Following the business session, a delicious luncheon was served, after which cards were enjoyed.

Funeral services were conducted by the Rev. Dean Plassmann Tuesday, April 11, for Ethel E. Hack, who died Sunday, April 9, 1978, at Peotone-Bensenville Home. Burial was in the Beecher Mausoleum.

Ethel Hack, nee Wehmhoefer, was born March 23, 1898, in Beecher, and has lived in the area her entire lifetime.

She is survived by one daughter, Mrs. Philip (Geraldine) Imholz, Beecher; two grandchildren and three great-grandchildren.

She was preceded in death by her husband, Arthur, and two brothers.