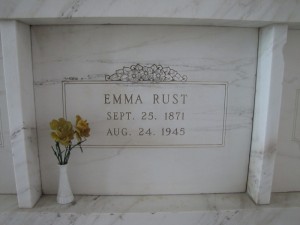 Mrs. Henry Rust, 73, passed away at St. James Hospital, Friday afternoon, after having suffered a stroke while convalescing from a recent operation. She had been confined at the hospital for several weeks. The deceased had been making her home since last September with her daughter, Amanda, Mrs. Arthur Wehling, at Sollitt.

Funeral services were held, Monday, at 2:00 p.m. at the Hack Funeral Home. Burial was in the Beecher Mausoleum.