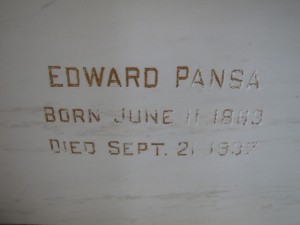 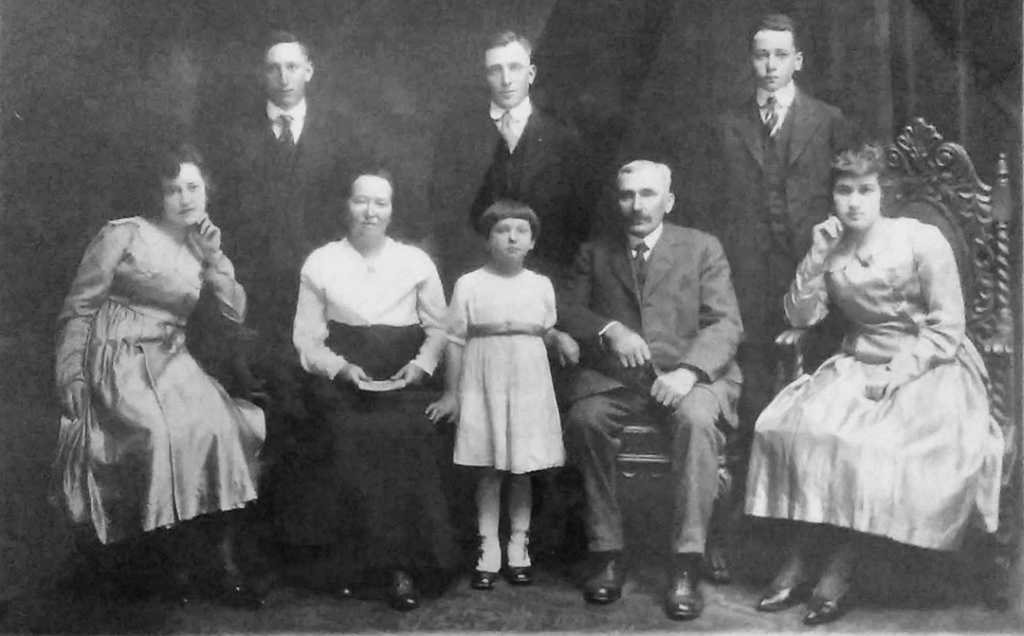 Edward immigrated to the United States in 1883 while still a youth, making his home on the Pansa Homestead in Crete, Illinois according to the 1910 census. 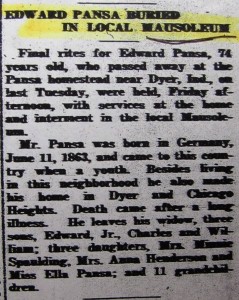 Final rites for Edward Pansa, 74 years old, who passed away at the Pansa homestead near Dyer, Ind., last Tuesday, were held, Friday afternoon, with services at the home and interment in the local mausoleum.

Mr. Pansa was born in Germany, June 11, 1863 and came to this country when a youth, around 1883. Besides living in this neighborhood, he also made his home in Dyer and Chicago Heights. Death came after a long illness. He leaves his widow, three sons; Edward Jr., Charles and William; three daughters, Mrs. Minnie Spaulding, Mrs. Anna Henderson and Miss Ella Pansa; and 11 grandchildren.

FUNERAL THIS AFTERNOON FOR EDWARD PANSA 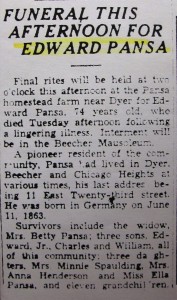 Final rites will be held at two o’clock this afternoon at the Pansa homestead farm near Dyer for Edward Pansa, 74 years old, who died Tuesday afternoon following a lingering illness. Interment will be in the Beecher Mausoleum.

A pioneer resident of the community, Pansa had lived in Dyer, Beecher and Chicago Heights at various times, his last address being 11 East Twenty-third street. He was born in Germany on June 11, 1863.

Editor’s note: It was only 3 short months after Edward Sr.’s death that his family had to endure yet another death in their family. His eldest son, Edward Jr. was murdered in cold blood on his farm, when a couple of thugs came to the farm under pretense of buying a pig, then tortured and killed him. Completing the job, they shot his wife Hulda in the bedroom. Believing them both to be dead, the criminals departed the farm. Hulda was able to recover sufficiently to miraculously drag herself to the farm of William Pansa, a half mile away, in the freezing cold. She was rushed to the hospital after relating the tragedy, and the authorities were notified. By very fine work, the criminals were soon rounded up and identified at the hospital by Mrs. Pansa. The two accused criminals received just punishment, one by hanging himself in the county jail and the other by execution in the electric chair.