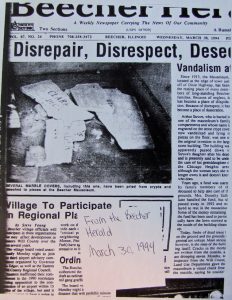 SEVERAL MARBLE COVERS, Including this one, have been pried from crypts and smashed to pieces at the Beecher Mausoleum.

Arthur Struve, who is buried in on of the mausoleum’s family compartments and whose name is engraved on the stone crypt cover now vandalized and lying in pieces on the floor, was one of the original investors in the large stone building. The building was apparently passed down to Struve’s daughter after his death and is presently said to be under the care of his granddaughter of the Chicago Heights area, although the women says she no longer owns it and doesn’t know who does.

Years ago, a fund was started by family members of the deceased to help care of the grounds. Mrs. Dorothy Saller later handled the fund, but she passed away in 1992 and was laid to rest in the mausoleum. Some of the money remaining in the fund has been used to periodically have the lawn mowed and the inside of the building cleaned up.

THE GLASS BLOCK WINDOW on the mausoleum’s south wall is now a gaping hole, open to the elements, as a result of vandalism at the 81-year-old building.

Today, limbs of dead trees lie on the ground and the grounds in general are unkempt. More serious, however, is the state of the building itself. Cracks in the mortar are evident from the outside, as are drooping eaves. Monday, an inspector from the Will County Land Use Department gave the mausoleum a visual check from the outside, saying he couldn’t enter the building without the owner’s permission. The inspector’s conclusion: the building is definitely “in disarray.”

Bob Williamson investigated the problem a couple of years ago and discovered through the Recorder of Deeds that the woman in Chicago Heights was receiving a tax bill on the property. He says that the original plan was that money in escrow would provide for perpetual care of the mausoleum. What happened to that money is unknown.

But the poor condition of the mausoleum has not only been the result of neglect. Over the years, the building, which is isolated by St. Luke’s Cemetery to the east, a field to the south, the highway to the west, and one home some distance to the north, has been a favorite mark of vandals. Bullet holes have pierced the glass block windows as well as the outside stone walls themselves. The entrance’s lock is broken, providing easy access to people who have apparently used the building for gathering, and left behind music tapes and empty alcohol containers. Part of the large glass block window at the south end of the building has been smashed, and glass is strewn across the floor for several feet. The worst damage has occurred in three of the four family compartments, where the stone faces that cover the crypts and dear the names of the deceased have somehow been pried from the crypts and lie on the floor in pieces.

Since the owner has not taken responsibility for the mausoleum, family members of the deceased face frustration year after year, seemingly unable to force any action and helplessly watching as neglect and disrespect take their toll.

A local high school boy was so upset by the article that appeared in the 1994 Beecher Herald that he took it upon himself with the permission of his mother to try to clean up some of the mess. Notice the broken headstone piled in the corner of the Horn compartment. He swept out the building and cleaned up the best he could. GOD bless his young soul. And Thank you young Sir.

We cannot display this gallery

You also saw the broken headstone pieced back together in 1996 so we could make temporary headstone correctly.