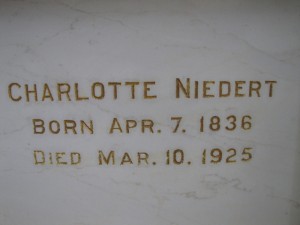 German parentage uncertain. Possible father:
Frederick Meier/Meyer
She immigrated to the USA in 1859 at age 23.

Fred Heine died in May of 1866.  Charlotte was pregnant with Sophie at the time of Fred’s death. Sophie was born September 17, 1866.

Mrs. Henry Niedert, Charlotte Meyer, was born April 7, 1936, at Welsede, Hessen, Germany. At the age of 23, she came to this country, and shortly afterwards was married to Frederick Heine at Crete, IL. This union was blessed with four children, one dying in infancy. The surviving children are: Fred Heine, Beecher, Sophia, Mrs. Fred Dorfmueller, Crete and Mary, Mrs. Fred Akemann

This wedded life lasted but seven years, when on May 18, 1866, her husband was called from her side. A few years later (editor’s note: it was only months later) she entered into a second marriage with Henry Niedert, the ceremony being performed at Eagle Lake. Four sons and one daughter were born to this union, the daughter having preceded the mother in death. The surviving children are: Henry of Beecher, William of Lowell, IN., Carl, west of Beecher, and Herman of Beecher. This happy marriage was also broken up too soon, the husband answering the final summons on Feb. 7, 1882. Since that time the departed lived with her two sons, Fred and Herman in Beecher.

Always quite well and happy, considering her age, until a few days prior to her death, When old age infirmities caused her to seek her bed, from which the angel of death called her on Tuesday afternoon, at 3:25 o’clock, at the ripe age of 88 years, 11 months and 3 days. Those surviving are the above named children, 24 grandchildren and six great grandchildren and a host of other relatives and friends.

Funeral services were conducted Friday, beginning at 1:30 o’clock p.m. at the house and at 2:00 o’clock at St. Luke’s Church, Rev. G Horst officiating. Burial was in the Beecher Mausoleum.

Mrs. Niedert, an upright, conscientious Christian, was at all times deeply interested in things religious and proved herself a most faithful, loving wife and mother.

(Editor’s note: we made a few corrections regarding the children in the obituary according to the genealogy records we have discovered)