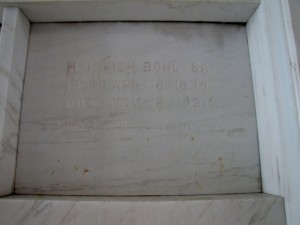 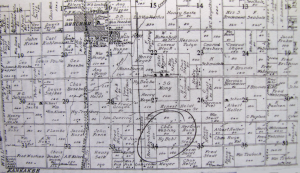 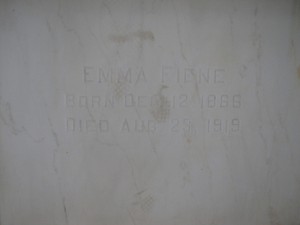 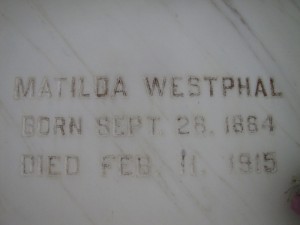 Half Sister to: Carrie Hoffmann, whose parents were Maria Wehmhoefer Hoffmann and  Frank Hoffman

A quiet home wedding took place, Sunday, at the home of Mrs. M. Hoffman, when at 4:30 o’clock p.m. Rev. D. Bierbaum of the Evangelical St. Lucas Church pronounced the words which united her daughter, Miss Tillie Wehmhoefer, and Mr. Wm. Westphal in the bonds of holy matrimony. The ring service was used. The wedding was a quiet one, only near relatives being present.

The bride was becomingly attired in a costume of white embroidery, princess style, and carried a bouquet of white roses. The attendants were Miss Clara and Wm. Wehmhoefer, sister and brother of the bride. 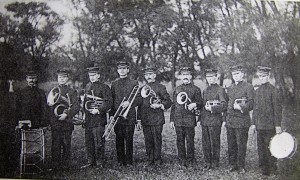 After the ceremony, those present extended hearty congratulations and partook of a bounteous wedding dinner. In the evening the Beecher Cornet band serenaded the couple with a few choice selections.

The bride is an esteemed and popular Beecher young lady, who has a host of friends. The groom is a business man of Crete, being one of the proprietors of the Exchange Hotel. Like his bride, he is very popular among his large circle of friends and is a good business man.

The young couple will make their home at Crete, where they will be “at home” to friends after July 5.

The Beecher Herald joins with friends in extending congratulations.

Does anyone have a photo of William & Tillie Wesphal or of the Exchange Hotel in Crete?

The End Came Last Night at Her Home In Monee

Funeral Will Be Held, Sunday, at 2 o’clock, in St. Lucas Church

Friends were shocked, this morning to learn of the death of Mrs. William Westphal, nee Tillie Wehmhoefer, which occurred at about 10:30 o’clock, last evening, at her home in Monee.

It was generally known that Mrs. Westphal had been in failing health for the past two years, but it was not known that she was critically ill even by her closest relatives here. Yesterday, her mother, Mrs. Mary Hoffmann, was called to Monee on the information that her daughter was growing weaker, but it was not thought at that time the end was near.

The funeral of Mrs. William Westphal was held on Sunday. Services were held at the home in Monee at 9 a.m., Rev. Ed Pinchert officiating, after which the funeral cortege proceeded overland to Beecher, where services were held at 2 o’clock at the St. Luke’s Evangelical Church, Rev. Horst officiating. The pall bearers were Henry, Ed and William Wehmhoefer, H. F. Claus of Beecher, and Leonard Cole of Steger, and Martin Peters of Monee. The church was filled to the limit with friends of the deceased who came to pay the last tribute to the dead. Many beautiful floral offerings bedecked the casket, Rev. Horst paid a glowing tribute to the deceased and the choir rendered a number of appropriate selections. The remains were laid to rest in the Beecher Mausoleum.

Matilda Wehmhoefer was born in Chicago, Sept. 28, 1884, later moving with her parents to Beecher. She was confirmed in St. John’s Church in 1898, by Rev. Koch. On June 22, 1909, she was married to William Westphal by Rev. Daniel Bierbaum. She had been in poor health for about a year, and passed away Feb. 11, 1915, at the age of 30 years, 4 months and 13 days. Besides her grief stricken husband, she leaves to mourn her demise a mother, Mrs. Mary Hoffman, three brothers, Henry, Ed. and William, four sisters, Mrs. Minnie (H.F.) Claus, Mrs. Lydia (Leonard) Cole, Misses Clara and Carrie, eight brothers-in-law, eight sisters-in-law, father-in-law, and a number of other relatives.

Deceased was a young lady of excellent traits, possessing a kind and cheerful disposition at all times, and one who numbered her friends by her acquaintances. She was a devout Christian in the Evangelical Lutheran faith, and was a regular attendant of devotional services in her church. She was a devoted and loving wife, and a good neighbor. Her early demise is a sort of great grief to her husband and relatives and only time will assuage.

(Editor’s note: Matilda’s burial was the second in the Mausoleum after its completion)

Matilda’s family members also resting in the mausoleum are: