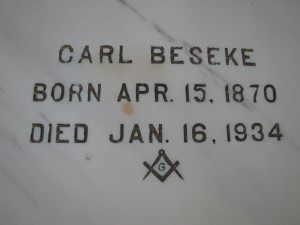 The departed, Charles Beseke, was born April 15, 1870, one mile southwest of Beecher. On June 6, 1870, he was baptized in the name of the Triune God by Rev. Gotlieb Reinecke and thus received into the family of the children of God. Following a period of instruction in the great fundamentals of the Christian religion, he was confirmed by the Rev. G. Koch, March 31, 1895.

On Feb. 15, 1894, he was married to Miss Margreta Tobeck, the ceremony taking place at Chicago. This happy union was blessed with seven children, one of whom, Mary, in infancy preceded the father in death. The surviving children, who together with the mother deeply mourn the departure of a faithful, loving husband and father, are: Louis, Fred, Charles Jr., Frieda, and Elmer of Beecher and Meta, Mrs. Martin Paul of Grant Park. Following their marriage the young couple engaged in farming opposite the old Beseke homestead. Diligently and faithfully applying themselves to their chosen work, their labors were bountifully blessed, bringing them peace and contentment. Always in the best of health a slight stroke some twelve years ago slowly began to undermine and sap his strength. Within the last six years, while making their home here in Beecher, his physical and mental condition became such that he was practically an invalid. About two weeks ago his condition gradually grew worse, and although everything possible in the way of medical skill and loving care was done, he peacefully closed his eyes in death, Tuesday, Jan. 16, at 3:30 a.m., at the age of 63 years, 9 months and 1 day.  In honor and to the great credit of his family it must be said that during his many years of illness he was given the very best of attention and care by his loved ones especially by his wife, who was untiring in her loving ministrations. He leaves to mourn, his wife, the children already mentioned, one sister, Mrs. Kirchhoff, Sollitt; two brothers, Henry, Alpha, Minn., and George, Beecher, three grandchildren and a host of other relatives and friends. Funeral services were conducted, Friday, Jan. 19, beginning at 1:30 o’clock at the home and continued at St. Luke’s Church, where his pastor, Rev. G. Horst, spoke words of comfort in both German and English. Offerings of sympathy in the form of flowers and a monetary gift, in memory of the departed, by his brother, George, for charitable purposes, featured a new way of showing esteem of the deceased. Burial was in the Beecher Mausoleum.

The departed, always a respected citizen of the community, was fair, honest and upright in all his dealings, dependable and loyal to all his friends. In the role of a husband and father he was lovingly concerned about the welfare and happiness of those whom God had entrusted to him. Blessed with earthly means the departed always stood ready to uphold the church and charitable institutions fostered by the church.