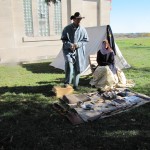 ‘Party on’ was the mantra, despite cold weather, ongoing restoration work, and costumed kids that were too cute to pick just one. The Beecher Mausoleum 2014 Fall Festival and Halloween Party earlier this month on the mausoleum grounds was a smashing success,

with over 200 guests showing up throughout the afternoon. There were lots of new faces, including some descendants of families interred who introduced themselves for the first time, as the Beecher Mausoleum Guardian Angels Association commemorated the mausoleum’s 100 year anniversary. The event was meant to thank the myriad volunteers, professionals and union craftsman who have stepped up to aid in the building’s restoration efforts, but also to celebrate the season with a little Halloween fun, said Sandra Thielman, who heads the Guardian Angels Association. “Without their support,” she said, “there would be no restoration at this level.” 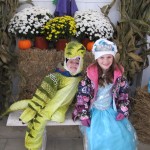 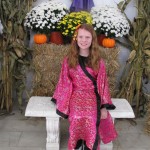 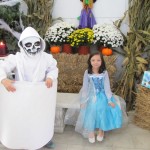 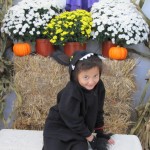 “Everyone that liked a photo (on the mausoleum Facebook page) was a judge. I just could not exclude any of them. So I chose all of them,” Thielman added. Each participant, was awarded $10 each. 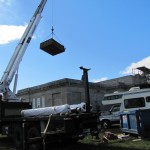 Knickerbocker crane outside, in the front of the building, the work continued during the festivities, as the roofing project which is part of the building’s main repair, remained in full swing. Cranes and scaffolding along with workers hoisting roofing material onto the roof illustrated just what has made mausoleum supporters so grateful. 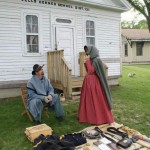 Brian Conroy & Jill Silbert Around the back of the building, Brian Conroy and Jill Silbert, First Michigan Engineers and Mechanics, Company E., dressed in period costume depicted what a Civil War camp was like. Such a scene may have been familiar to Civil War Veteran Joseph Cloidt, a former Beecher resident buried inside the mausoleum. Most notable was the fact that several young people came and showed an interest in the mausoleum’s history. In addition to the festivities on the ground, two local pilots flew overhead, waved their wings and circled the grounds to honor the fallen pilots inside. At least three of the souls buried in the mausoleum were known aviators. The Fall Festival was such a success that Thielman says it may just be repeated next year. The Beecher Mausoleum Guardian Angel Restoration Project is a 501c13 not-for-profit organization. All cash and material donations are tax deductible. Contributions can be made through PayPal. More information about the history of the project and current photos of the restoration are available online at http://www.beechermausoleum.org.