Prestige is good, but does little to solve problem 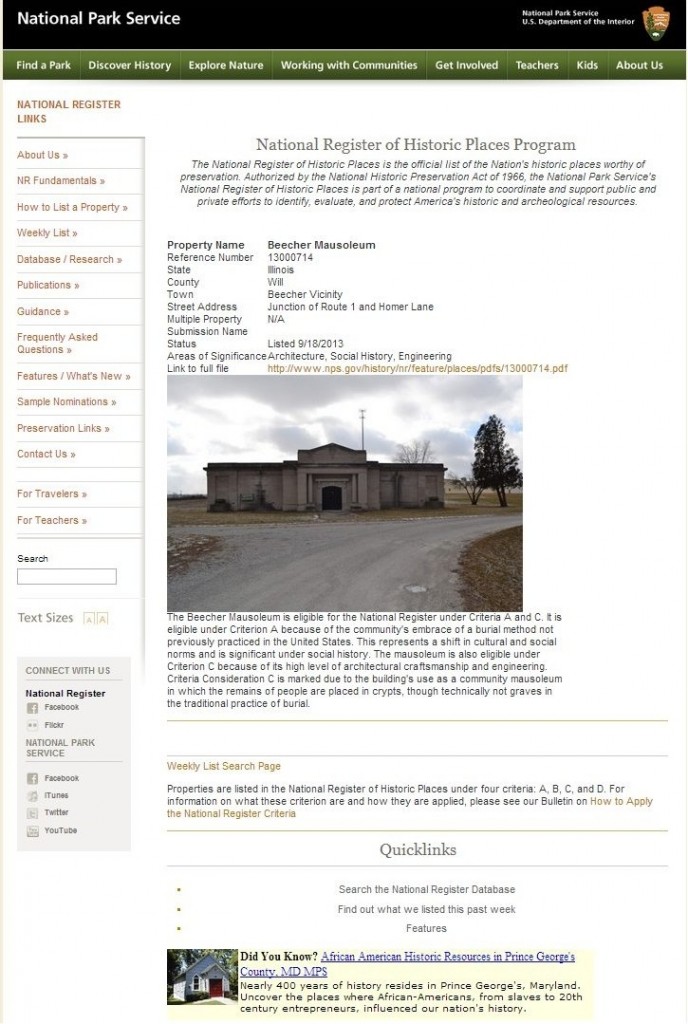 Listed on the National Register of Historic Places Sept. 18, 2013

The Beecher Mausoleum, at the junction of Route 1 and Horner Lane in unincorporated Washington Township, has been listed on the National Register of Historic Places, as of September 18, 2013. It is now acknowledged by local, state, and federal agencies.

11-07-2013 Beecher Mausoleum Listed on National RegisterRecognition by the United States Dept. of the Interior’s National Parks Service deems the 100-year old structure worthy of preservation. The Beecher Mausoleum is an example of a historic trend in the early 20th century to provide an option to in-ground burials. The building embodies distinctive characteristics of that period with its limestone and marble construction. In addition, this neo-classical structure, completed in 1913-1914, is an example of other similar works by Cecil Bryan, an architect who is well known for building approximately 80 mausoleums across the country.

The Ten Most Endangered Historic Places of 2013 photo page.resizedThe State of Illinois is well-acquainted with the Beecher Mausoleum. State preservationists were responsible for submission of the nomination for designation on the National Register. Also, in April of this year, Landmarks Illinois recognized the Beecher Mausoleum by placing it on its list of ‘ten most endangered historic places.’

Will County recognized the Beecher Mausoleum in 1998 when the building was named a Will County historic landmark.

While these accolades are a source of pride for the community as well as those who have taken an active interest in this symbol of Washington Township’s history, there is much more work to be done. There remains a need for funding for maintenance and perpetual care of the building.

None of it would have been possible without the tireless efforts of Sandra Lee Thielman and the Beecher Mausoleum Guardian Angel Association board she helped create.

Sandra Thielman is the great granddaughter of Henry Thielman, an early community member often credited with spearheading the effort to build the mausoleum. He and his wife Minnie, along with their son, Walter are buried inside the mausoleum, as is Sandra’s mother Dolly.

Sandra remembered how as a young child, her family would travel to Beecher to visit her relatives’ burial place. It was her grandmother Paula’s desire to be buried in the Beecher Mausoleum, near her husband Walter, and son Loren, that first brought Sandra Thielman back to the place she remembered. When she returned in 1996 she was appalled at the condition of the once-regal structure, thus sparking a whirlwind of managing, organizing, and fundraising activities.

Before Sandra would consider burying her grandmother there, she wanted to clean and spruce up the place. She took it upon herself to acid-wash the exterior, clean and paint the ceiling inside, and patch holes in the roof as best she could. With much of her own money, she hired people to help. When Paula Thielman died, Sandra honored her wishes. The last to be buried in the Beecher Mausoleum, Paula was laid to rest in 2001.

Of course Thielman has a deep, personal connection to the Beecher Mausoleum, but for her it isn’t just a burial place for her family members. While many people visit the graves of their loved ones, they don’t normally devote 17 years of their lives or spend thousands of dollars of their own money to protect not only their own heritage but that of an entire community.

Sandra has spent countless hours researching the genealogy of those entombed there, evident in the legion of pages she has compiled on the mausoleum’s website at: http://www.beechermausoleum.org. Through her research, she has learned some of the stories of the people interred in the mausoleum—people who inhabited the Beecher area during its early years. The stories paint a picture of Beecher, Washington Township, and eastern Will County that Thielman is happy to share with anyone and everyone who wants to hear them. Though she has never lived in Beecher herself, she recognizes and reveres her deep roots there and her intrinsic connection to the community.

Over the years she has met and made friends with some of the ancestors of those buried inside the building. She certainly feels she knows them—the living as well as the dead.

The mausoleum and the souls inside represent the lives of 171 people that once lived, loved, and worked in the Beecher area. They built the community. Their connection to the present day is tangible.

Their legacy cannot be ignored or abandoned. Yet for too long this is just what happened, at least until Sandra Thielman came to town in 1996.

Thielman believes that the knowledge of yesterday relates to the present. What past citizens created must endure, especially in a community where so much of what they did remains to this day. Many of the buildings in Beecher are the same buildings where those people lived, shopped, and worked. The Beecher Mausoleum is a beautiful and architectural work of a master that deserves to be preserved.

It almost ended this summer.

Thielman recently uncovered Architect Cecil Bryan’s U.S. Patent for the roof he used on the Beecher Mausoleum. She discovered that he used asbestos roofing paper. That discovery led to the withdrawal of union roofers that had initially volunteered their labor to the project as a way to train young apprentices. Asbestos removal can be very costly as well as dangerous. Union leaders felt they could not volunteer on a job that could put workers in jeopardy.

This news set Thielman into a tailspin; it was the final blow for her. She knew she could no longer afford physically, emotionally, or financially to remain involved in the project if she had to deal with asbestos abatement. She had all but decided to take her family members out of the building, re-bury them elsewhere, and wash her hands of the Beecher Mausoleum once and for all.

If she walked away, she would never look back.

The community would face a huge financial, as well as ethical burden, because state law guarantees protection for the deceased. Locals would be responsible for all the souls inside and the building itself.

roof 2013 7
But “tenacious” might as well be Sandra Thielman’s middle name. Once again she traveled–nearly 100 miles from her home near the Wisconsin border–to Beecher. Now 57 years old, she hoisted her ladder and climbed atop the roof, a feat she has performed many times over the years.

She was advised by Jason Bright, a professional roofer that accompanied her on the latest trip that Cecil Bryan’s original roof system had not failed below the layer of asphalt and tar. She was pleased to learn that asbestos was not exposed.

She called Bob Howard, a member of the Will County Board and former Washington Township Supervisor, who serves on the mausoleum’s board, with the good news. He climbed onto the roof and witnessed that the asbestos was sandwiched between layers of asphalt. It was not exposed or friable and posed no threat to workers.

She knew replacing the roof could be a costly undertaking, even with free labor costs as promised by the union roofers. She began raising funds about a year ago when she first learned of the union’s interest in helping. She has raised several thousand dollars for materials for the project that will likely take place next summer, but it is likely not enough.

Tax deductible donations can be sent through the website, to Sandra directly, or deposited at the Beecher Mausoleum account at the First Community Bank of Beecher.

Howard, who is the business representative and financial secretary to the carpenters’ union, managed to convince his union brothers to rejoin the project.

As a result, the roof of the mausoleum will be replaced—probably next spring–thanks to: Local #11—United Union of Roofers-Waterproofers and Allied Workers, Westchester; the International Union of Bricklayers and Allied Craft Workers, Local #21, Chicago. The United Brotherhood of Carpenters and Joiners of America, Local #434, Chicago Heights has also offered to help anywhere they can. Workers have agreed to do whatever is necessary to repair and replace the roof and stone scuppers and drain spouts on the deteriorating building as well as repair the windows. They plan to use the project as a training activity for new apprentices. The work could potentially result in annual maintenance of the building at only the cost for materials.

Sandra remains concerned that money will be needed now and into the future. She is adamant that there needs to be some form of perpetual care for the mausoleum. She has done about all she can do alone. It is painfully clear that the burden of maintaining the mausoleum can no longer fall on the few ancestral families that have been supportive of the project.

“Ideally, a combination of the village, township, and county will have to step up to the plate,” Thielman says. “As a historical, architectural treasure worth preserving, this source of pride of the community has been built to stand the test of time. It just needs a little help,” she said.