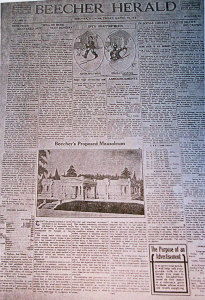 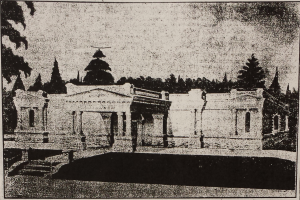 That the present method of earth interment is not the best, none will deny; it is responsible for much of the feeling of horror which accompanies the thought of the grave.

The strong desire which exists in every rational, human breast to preserve the remains of loved ones from the destroying elements of the grave and to soften the heart pangs of the sorrowing as the last sad rites of interment are performed, is responsible for this much better and safer method of interment which has recently been placed at our command – The modern mausoleum.

The modern mausoleum answers every purpose – it is sanitary, protects the lives of the living and preserves the remains of the dead; it is both aesthetic and economical.

Since this method is now available to the citizens of the community and at a cost that is less than that of earth-burial, and since, it is now possible to provide for the loved ones a beautiful resting place that will endure through-out ages, is it not the part of wisdom for every individual to co-operate in this vital and important movement?

This modern community mausoleum is like a chapel. No matter how inclement the weather, or disagreeable the conditions without, the corridors within represent a beautiful place of security, where the last rites over the remains of the departed are conducted without hurry or discomfort. Instead of the casket being lowered into the damp, soggy earth amid depressing conditions. It is placed carefully and quietly in a small white room in a marble palace, and instead of the earth falling on the casket lid with sacrilegious blows, a marble slab is slipped quietly into place. When this is done the feeling is left that the departed are merely in an adjoining room. And that no king or queen of old, or potentate of the present day has any more fitting burial place than the one which has thus been provided.

The individual who purchases one or more of these apartments in this grand community mausoleum leaves to his friends and relatives no trouble: the house is ready; it is pleasant, it is well furnished, a fitting place in which to sleep.

In thus laying to rest one who has departed this life, he can indeed be looked upon as one who wraps the drapery of his couch about him and lies down to pleasant dreams! The survivor forgets that his friend is dead, and remembers only that he has lived.

Naturally, everyone will want to know more in detail of this system of interment. Three principal features characterize the plan. First, the erection of a large community mausoleum or mansion house of the dead, as is shown above.

Third: a system of scientific desiccation within the compartments wherein lies the real secret of modern scientific skill.

An overpowering wave of sentiment in favor of this civilized burial is sweeping the world. A new Light Mausoleum entombment is fast doing away with the old method of disposing of the dead. Which is being denounced by the best medical authorities of the world as being unscientific, unsanitary, repulsive and wholly unworthy of our enlightened age.