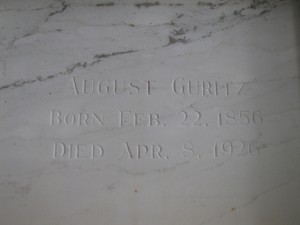 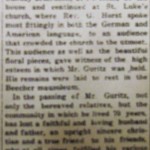 Funeral services were conducted, Sunday afternoon, at 1 o’clock, at the house and continued at St. Luke’s Church, where Rev. G. Horst spoke most fittingly in both the German and English languages, to an audience that crowded the church to the utmost. This audience, as well as the beautiful floral pieces, gave witness of the high esteem in which Mr. Guritz was held. His remains were laid to rest in the Beecher Mausoleum.

In the passing of Mr. Guritz, not only the bereaved relatives, but the community in which he lived 70 years, has lost a faithful and loving husband and father, an upright sincere Christian and a true friend to his friends, who at all times fulfilled his various duties with singular faithfulness.